Caravan for the rights of refugees and migrants

Five years ago, (4/2000) The VOICE Refugee Forum hosted the Refugee and Migrant Congress in Jena on behalf of the Caravan-for the rights of refugees and migrants. A major decision from that Congress was the campaign against the residence obligation law, otherwise known as the “Residenzpflicht”. 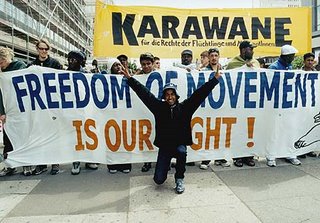 Activists from the VOICE like Cornelius Yufanyi, Sunny Omwenyeke, Akubuo Chukwudi and later Ahmed Sameer and others have decided to resist that law with civil disobedience. They defend their freedom of movement before the authorities and the courts. From the accused, they turned “accuser”-accusing the German government of violating their fundamental human rights to freedom of movement. They refuse(d) to pay any fine for violating the residenzpflicht and were ready to defend their natural rights even if it meant going to prison as Sunny Omwenyeke did for two weeks in December 2004 in Bremen.

Sunny Omwenyeke and Cornelius Yufanyi have now taken their cases to the European court of Human Rights in Strassburg after their appeals were refused last year by the German constitutional court in Karlsruhe. They are being represented by their lawyers: Gabriele Heinecke, Ulrich von Klinggraeff and Nuala Mole, a renowned Human Rights Lawyer from London (AIRE Centre, London), who is very experienced with cases at the European Court. 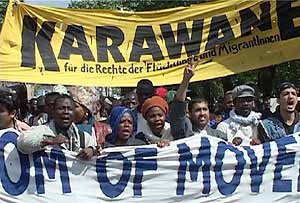 In light of the litigation at the European Court and to further back up our campaign against the residenzpflicht, we are inviting human rights and refugee groups or organisations and activists to document with us the cases of other asylum seekers or refugees that have been sentenced to prison or punished (with fines or hard labour) because of the Residenzpflicht. Or whose applications to travel have been refused by the foreign authority.

We want to ask you to support the cmapaign by sending to us information on the legal cases of the residential obligation law “Residenzpflicht” and on the cases of denial of permission to travel you may know about. We are looking for recent cases as well as for cases of the last years. It would be good if you could give us the reports and information about the persons, the countries of origin, the names of the lawyers and a short description of the case.

Since 1982, which is more than 20 years, the residential obligation law restricts the freedom and the personal and political rights of thousands of people seriously. The daily restriction of movements without choice of settlement violates our freedom and basic rights as human beings and as groups of refugees and migrants. Germany is the only country in Europe with this extreme restriction.

The campaign for the abolition of the residence obligation law has created public awareness of the ill sufferings and the abuses in our every day life as refugees. It has also “shamed” many of the authorities into dropping some of these cases against refugees in court.

Please respond with any available information that could further this campaign, you can also make public the cases of violation by residence obligation law.
Information should be sent to the address above or/and via email to the following addresses: thevoiceforum@emdash.org.

Please ensure a wider circulation of this appeal. More information/materials are available on request:http://www.thevoiceforum.org.

The VOICE Refugee Forum - a network of refugee political activists

We are informed about the difficult living conditions of refugees in Germany and the human rights situation in their home countries.

The forum was initiated by Africans in Thueringen as "The VOICE Africa Forum". Our group in Jena provides in the meantime a forum for all refugees involved in our common struggle in different towns and cities of Germany in:

The daily life of refugees is designed by isolation and social exclusion with the permanent threat of deportation.

Since the foundation of "The VOICE Forum in October 1994 in Mühlhausen in East Germany, and (since 1998 that we joined the network of The Caravan for the rights of refugee and migrants) hundreds of thousands of refugees and migrants have been deported from Germany without political or humanitarian consideration.

At present, we focus on the racist “Residenzpflicht” (residence obligation) for asylum seekers in Germany that violates our human rights. This obligation is stated in paragraph 58 of the Asylum Procedure Law (Asylverfahrensgesetz). It means that during the asylum procedure for the recognition as a refugee, asylum seekers are only allowed to leave the district they have been assigned to with the permission of the Foreigners’ Office.

Due to the residence obligation, asylum seekers are subject to special repression. They are controlled by police and Border Protection Police (BGS) at stations, mostly due to the colour of their skin. These controls are racist in nature. Furthermore, asylum seekers receive a permission to leave their district only under special circumstances which are defined by the Asylum Procedure Law. Permissions for visiting relatives – except for parents and children – are within the discretion of the case manager. 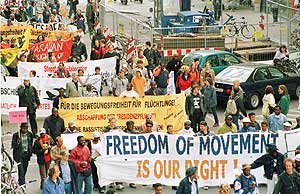 Permissions for visiting friends or for taking part in political events are almost never given. Violation of the residence obligation leads to criminal prosecution and even to imprisonment. Therefore, refugees are criminalized to a large extent. Racists and fascists have further arguments against so called criminal foreigners at their disposal. -“ The nationalist not only does not disapprove of atrocities committed by his own side, but he has a remarkable capacity for not even hearing about them.”(George Orwell)

We demand freedom of movement for everybody everywhere. We demand the abolition of the “Residenzpflicht” which isolates, excludes and criminalizes refugees in Germany. We invite everybody, who is interested, to participate in the campaign for the abolition of the residence obligation law in Germany. Everybody can take part. Go to refugee homes, inform yourselves and others about the situation of the people living there.

For those interested we offer the program of the “Forst – Film Tour”, which has already been to several cities in Thüringen. Information about the movie: http://www.forstfilm.com - an experimental movie by Ascan Breuer, Ursula Hansbauer, Wolfgang Konrad in cooperation with The VOICE Refugee Forum, A/D, 2005, s/w, 50 min. (won the „best documentary at the film festival “diagonale 2005” in Graz/ Austria) with discussion and information on strategies against social isolation of refugees in Germany and on the legal cases of Cornelius Yufanyi and Sunny Omwenyeke at the European Court for Human Rights against the residency obligation law. “Forst – the refugees’ way out of the forest”. More information